Ser Dontos Hollard is the last remaining member of House Hollard, which was extinguished alongside House Darklyn, during the Defiance of Duskendale. While the rest of his house was wiped out, Ser Barristan Selmy requested that the Mad King pardon Ser Dontos; since Ser Barristan had saved the Mad King, he acquiesced his request and Ser Dontos was taken to King’s Landing as a squire. On Joffrey’s first nameday as king, Ser Dontos was supposed to ride against another knight, but showed up too drunk. Joffrey took this as an insult and sentenced him to death. However, after Sansa pleaded to his life, Joffrey agreed to spare him, but stripped him of his knighthood and anointed him the town’s fool. Later, Ser Dontos appears to Sansa and gives her his mother’s necklace, before appearing once again during the chaos of King Joffrey’s death. 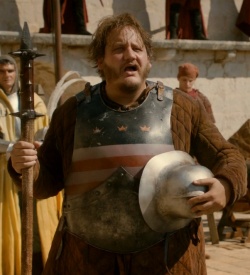