House Lannister is one of the most powerful of the Seven Kingdoms, with it’s seat at Casterly Rock. Despite not being one of the larger kingdoms, Casterly Rock sits upon many gold mines, making it the wealthiest of the Seven Kingdoms, and thus one of the most powerful. House Lannister is Warden to the West and their sigil is that of a golden lion upon a crimson field. Their more popular house words are “A Lannister always pays his debt,” though their true words are “Hear me roar!” 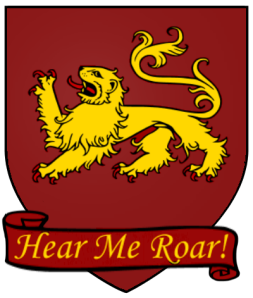 House Lannister lived as Kings of The Rock until Aegon’s Conquest, 300 years ago. Rather than bending the knee to Aegon, House Lannister joined with House Gardener, Kings of The Reach, to try and defeat Aegon and fight off his conquest. The Field of Fire refers to the battle that took place in which Aegon took to the sky with his three dragons and set ablaze the entire battlefield, burning alive nearly 4,000 of the Lannister and Gardener bannermen. Accepting defeat, King Loren Lannister gave up his kingship of The Rock and was made Lord of Casterly Rock and Warden of the West. After the Gardener King died in battle, Harlen Tyrell surrendered the armies of The Reach and Aegon rewarded him by making House Tyrell Lords of Highgarden and Wardens of the South.

Lann the Clever  is regarded as the first Lannister and founder of House Lannister. He was of the First Men nearly 10,000 years ago and it is said that he won over Casterly Rock from House Casterly using nothing but his wits. He was the first King of the Rock.

Loren Lannister was the last King of the Rock. After the Field of Fire, King Loren bent the knee to Aegon the Conqueror, ending the Kingdom of the Rock. Aegon allowed Loren to remain Lord of Casterly Rock and made him Warden of the West.

Tywin Lannister is Lord of Casterly Rock and Warden of the West. He is regarded as the wealthiest man in the Seven Kingdoms and perhaps the most powerful. His children are twins Cersei and Jaimie, in addition to the imp, Tyrion. After his father’s death, Tywin restored pride and power to House Lannister, reestablishing it as one of the most powerful in the Seven Kingdoms. During the reign of The Mad King, Aerys II, Tywin Lannister served as hand to the king. He later played a huge role in the overthrow of the Mad King during Robert’s Rebellion.

Joanna Lannister was the wife of Lord Tywin. She died giving birth to Tyrion. After losing his one true love, Lord Tywin was never the same. He often blames Tyrion for her death.

Jamie Lannister is the son of Lord Tywin and twin brother of Cersei. A fierce warrior, Jaimie was knighted at the age of 15 and became the youngest person to ever join the Kingsguard. After years of sworn protection of the Mad King, Jaimie eventually was the one to put his sword through the Mad King’s back during Robert’s Rebellion, earning him the infamous name of Kingslayer. Jaimie has had a secret incestuous relationship with his twin sister Cersei, and fathered three of her children, including King Joffrey, though most of the realm assumes these children to be of Robert Baratheon.

Cersei Lannister is the eldest child of Lord Tywin and twin sister of Jaimie. After Robert’s Rebellion, she became Queen of the Seven Kingdoms, and after his death, became Queen Regent as mother to King Jofffrey.  She is intelligent and ambitious, much like her father, yet less adept at being an effective leader. Cersei often uses sex as a tool to win the allegiance or support of men. She often feels limited by her gender.

Tyrion Lannister is the youngest child of Lord Tywin and perhaps the wisest. Born a dwarf, Tyrion is otherwise known as The Imp. He is hated by his father not only because of his appearance, but also because his mother died giving birth to him. Lord Tywin, as well as Cersei, has always blamed Tyrion for the death of his mother. Tyrion often demonstrates his skill at, and enjoyment of, “playing the game.” When Joffrey takes the Iron Throne, Tyrion becomes the King’s Hand. During the Battle of Blackwater Bay, Tyrion devises the plan to use wildfire to thwart off the invasion of Stannis Baratheon. His plan is successful and he saves King’s Landing from being sacked by Stannis’ army. Yet, upon arrival of Lord Tywin, Tyrion is removed from position of King’s Hand and replaced by his father.

Kevan Lannister is the brother of Lord Tywin and one of his closest advisors. Though he has lived in his older brother’s shadow, Ser Kevan is also wise and cunning like Tywin. He is known for his loyal allegiance and reliability to his older brother and House Lannister.