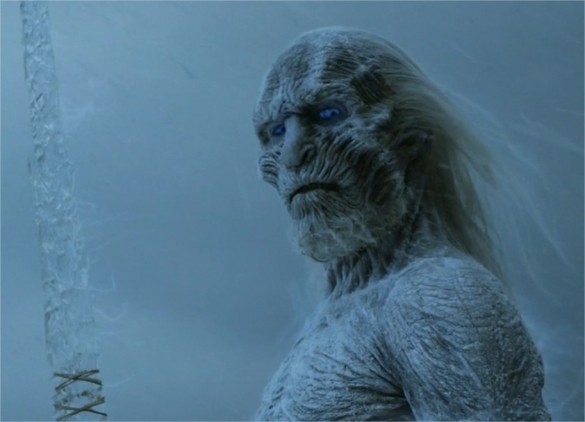 White Walkers are described as having skin as pale as milk and deep blue eyes that burn like ice. They are taller than the average man and fight with freezing crystal swords that shatter anything they come in touch with. They are extremely difficult to defeat, though it was discovered during the Long Night that they are vulnerable to weapons made from obsidian, otherwise known as Dragonglass.

There is much unknown about the White Walkers, though it appears they have made several attempts throughout history to wipe out mankind. The White Walkers lead an army of wights, resurrected corpses that fight under their command. Though there have been several recent sightings of White Walkers in the North, they are still considered to be nothing more than myth to most of Westeros, being that they have not been seen for nearly 8,000 years.

An army of wights

The very first episode of the GoT series begins with a group of Night’s Watch rangers coming across several mutilated corpses. We get a brief glimpse of a White Walker before it kills one of the rangers (see video below).