Disclaimer: There are no spoilers in this article. I have only read the first three books and I have no knowledge of what transpires in the show moving forward. Any views or content expressed are solely personal theories, opinions and insights.

THE ONE TRUE GAME

In the Game of Thrones world, for better or worse, there are so many games being played at once. For the first few seasons, the most significant and end-all game that was being played was the battle for the Throne. At the time, this appeared to be the defining game of the show and the only one that really mattered. And though five seasons later, this game is yet to be resolved as Stannis and Khaleesi are both still major players battling for the Throne, we continue to see so many additional games that are introduced. Whether it be a game of love or a game of revenge; a game of truth or a game of deception — the Thrones world has done something that few stories have ever done before — it has created so many different layers of plot-lines that are all occurring simultaneously. And with each game comes its respective players, its location of play and so many other details that make each game so interesting and enjoyable to watch unfold. But the multitude of all these games all being played at once also proves to do one other thing very well — it distracts us from the one true game being played — the only game that matters — the game of Ice and Fire. And in the 48th episode to date, we were abruptly and violently reminded, more so than ever before, of the game that we should all be focused on — the one that will likely determine the fate of all mankind.

As Jon Snow approaches Hardhome, the basecamp of the Wildlings, alongside his new ally Tormund Giantsbayne, the mood is colder than ever before. The mission at hand is a nearly unthinkable one — to unite the Wildlings and the Night’s Watch — two clans that have been warring for thousands of years. Yet is is also clear that Jon Snow has no choice — he must unite all men if they are to have any chance at fighting off the White Walkers and avoiding a fate of death and darkness.

After a hostile welcome from the Lord of Bones, Tormund beats him to death, showing the other Wildlings that he means business, while also making it clear to viewers that his allegiance to Jon Snow is true. After Jon Snow and Tormund make their pitch to the leaders of each Wildling clan, some agree to join their cause while others stubbornly refuse. And as Jon Snow starts to look a lot like Moses, leading an exodus of Wildlings onto the sea to the promised land of Castle Black, all hell breaks loose as an avalanche of wights (the army of dead led by the White Walkers), ascends on Hardhome. 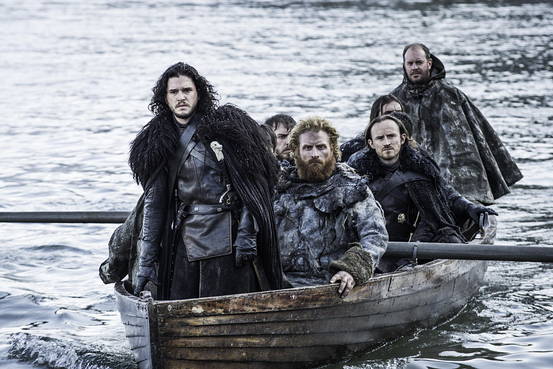 Jon Snow once again shows that his bravery and leadership is unparalleled; where most men would have fleed, Jon Snow stays back to defend the Wildlings and fight off the wights. But perhaps he regretted that decision just moments later, as he looks up to see a band of White Walkers on a cliff, looking down at the battle below. And not just any White Walkers. These appear to be the leaders of the White Walkers, the ones we saw just once before, in a season four episode when they took one of Craster’s babies into the far North and turned it into a White Walker, by touching a finger to the baby’s face and turning its eyes a deep blue. It was assumed that we had just witnessed how a White Walker is created (which begs the question — how was the first White Walker created?), and we also learned what the White Walkers have been doing with the babies Craster had been leaving for them.

Things get even worse as hundreds more wights descend upon Jon and whatever’s left of the Night’s Watch and Wildlings, and they’re forced to retreat to their boat and head back to Castle Black. But not before we saw what was one of the, if not the single most powerful and revealing scene in the five seasons we’ve been watching Game of Thrones. It was a single image that epitomized what lies at the core of this epic story created by George R.R. Martin — a series entitled A Song of Ice and Fire. Martin named this series A Song of Ice and Fire for a reason…after all, at it’s core, it’s a story about Ice, darkness and evil versus Fire, light and good. But viewers often lose sight of these themes and the true name of the series itself, since HBO for its TV adaptation chose to use the name of the first book in this series, A Game of Thrones, presumably because it was a more marketable title. But the Game of Thrones was merely the title of the first book — and as we know — a much smaller game compared to the greater game of Ice versus Fire.

And now, as Jon Snow exchanges a long, cold, hard stare with one of the White Walker’s leaders — we see these very themes personified. Ice, darkness and evil versus Fire, light and good — two opposing forces that have been in a constant struggle since the beginning of the world. And as Thrones history tells us, during the Long Night, thousands of years ago, a great battle transpired between these two forces, and darkness almost prevailed as all of mankind was pushed near the brink of extinction, until Azor Ahai, with his burning sword called Lightbringer, fought back the White Walkers. It was at this time that the Wall was built to keep out the White Walkers and defend the realm from the darkness that lived beyond. In the religion of the Lord of Light, it was prophecized that at some point in the future, Azor Ahai would be reincarnated as the Prince that was Promised, to once again fight back the White Walkers in a battle that would determine the fate of all mankind. And, as we know, Melisandre has often spoke the words of the Lord of Light, telling that there is only light versus dark, good versus evil and Ice versus Fire. As we’ve seen before, the religion of the Lord of Light seems to be the most legitimized, the most rooted in truth and perhaps the most significant to the outcome of this world. And now as Jon Snow stares down a White Walker leader, it appears that prophecy about Azor Ahai being reborn to once again fight back the White Walkers might be true and that this battle is more imminent than ever; Fire and light will oppose Ice and darkness, with the prevailing side determining the fate of all mankind.

The Night King raising up his wights

A QUICK RECAP OF EVERYTHING ELSE

Compared to the final scene which brought us back to the only game that matters and to the title of this series itself — Ice versus Fire — evil versus good — dark versus light — the other scenes of this episode appear almost insignificant. But, in the greatest game that is yet to unfold and the great battle that is yet to take place, the other smaller games will decide the roll each player is to play in the greatest game of all. So here’s a quick recap…

In Mereen, we see how things play out between Jorah, Tyrion and Khaleesi. Tyrion quickly establishes his cunning and intelligence before Khaleesi and after she seeks his advice regarding what to do with Jorah, Tyrion counsels that she should show him mercy because Jorah is devoted and loyal, yet he cannot be seen marching by her side after he betrayed her. Jorah is banished from the city and goes back to his previous master in hopes of fighting at the great pit before Khaleesi. Behind closed doors, Tyrion and Khaleesi chat about Khaleesi’s quest for the Throne and Tyrion suggests that she should consider remaining in Easteros, where perhaps she can do more good for the common people. But, Khaleesi reminds him that Easteros is not her home, and refers to all the powerful houses of Westeros as spokes on a wheel that go round and round — one day this family is on top — the next day another family is on top. Tyrion tells her that many before her have tried to stop the wheel — to which she powerfully responds that she is not going to stop the wheel, she is going to break the wheel. 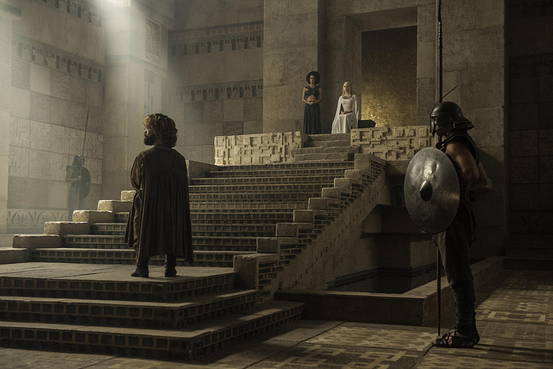 In King’s Landing, Cercei remains in a cell without any tricks or schemes to get her out — she appears completely powerless for the first time. But, Qyburn, one of her few remaining loyalists, reminds her that he is “still working,” probably referring to the Mountain, whom remains in his lab as some sort of evil science experiment. With only two episodes left this season, will we see what kind of freakish monster Qyburn has perhaps turned the Mountain into? And will he help free Cercei?

In Braavos, Arya continues with her training as she begins to assume a new identity. Jaqen tells her that she will study “the gambler” and learn everything about him, before giving her a vile assumed to be poison. We are left to conclude that this will be a test to see if she is capable of committing her first assassination and joining the Faceless Men. 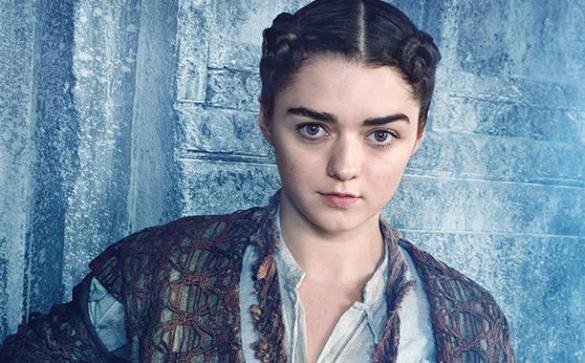 In Winterfell, after an exchange between Sansa and Theon/Reek, Sansa learns that her brothers Bran and Rickon are in fact alive. She joins the Boltons and Samwell Tarly as the only people who are aware of this powerful information. Elsewhere in Winterfell, Roose and Ramsey discuss the impending battle with Stannis and Roose suggests that they stay behind the newly mended walls of Winterfell, while Stannis’ men freeze and starve in the winter cold. However, Ramsey says that they should take the fight to Stannis and that he only needs twenty good men — leaving us to wonder what kind of plan he’s got that would only need twenty men to defeat Stannis’ army.

With only two episodes left, things have accelerated exponentially and it will be interesting to see how much is wrapped up in the final two episodes. One major battle looks to be just around the corner between Stannis and the Boltons, while the greater battle between light and dark doesn’t appear to be too far behind. In King’s Landing, the Throne is more vulnerable than ever before, with major houses Lannister and Tyrell both weakened as their principal house members are locked up in cells. Across the world, Khaleesi might just have found the counsel that she’s been waiting five seasons for. Elsewhere in Easteros, Arya is taking steps closer towards joining the Faceless Men. Sansa has learned some major information that her brothers are still alive and let’s not forget Brienne is not far away, waiting to help her at just the right moment. Baelish is somewhere behind the scenes scheming and Varys is out there somewhere as well. Most importantly, it no longer appears that Winter is Coming — winter is now here. And with just two episodes until the 50 episode mark, buckle up because the home stretch of season five is sure to be a bloody, brutal and bumpy one.