“SHOW THEM HOW IT FEELS TO LOSE WHAT THEY LOVE.”

These were the words spoken by a mother, Catelyn Stark, who has lost nearly  all that she ever loved. After Ned’s execution, she was separated from her two daughters, Sansa and Arya. Soon thereafter, she finds out her two youngest, Bran and Rickon have been executed by Theon Greyjoy, who has also burnt Winterfell to the ground. So, when her only remaining son and King in the North, Robb, asks her to weigh in on his plan to lay siege to Casterly Rock, she responds that he should show them how it feels to lose what they love. Though Robb had not sought his mother’s council since she defied him by freeing Jaimie Lannister, when faced with his most difficult decision yet, he turned back to his mother for her advice, and her response was  powerful and unwavering – “Show them how it feels to lose what they love.”

HE WAS A CROW THE WHOLE TIME

Now further south of the wall, Jon Snow and the Wildlings look to raid the home of a man who breeds horses for the Night’s Watch. As they approach, Jon strikes his sword to a rock to give alert to the man that they are coming, allowing him to escape on horse.

Once they catch the horse-breeder, Tormund Giantsbayne puts a sword to his throat, before Orell, who has long suspected Jon is still a crow, suggests that Jon be the one to do the deed and prove him otherwise. As Jon is unable to kill the horse-breeder, Ygritte steps up and does her man’s work. At this point, it becomes evident to the Wildlings that Jon has been a crow all along. As the Wildlings surround Jon, Ygritte chooses to fight for love, rather than for her own people. Sadly, Jon abandons her and rides off, but not before putting his sword through the belly of Orell and whispering in his hear “You were right about me the whole time.” 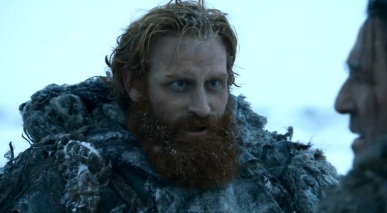 BRAN IS A SKINCHANGER…AND POSSIBLY MORE

As his brother Jon is outnumbered by Wildlings outside the tower he his hiding in, Bran skinchanges into his direwolf, Summer. This is the first time we have seen Bran change skin into another animal. As he takes over the body of Summer, he attacks the Wildlings, along with Jon’s direwolf, Ghost. They kill two of the Wildlings and ultimately allow Jon Snow to escape.

Even more significant than Bran shifting into Summer, before that, he takes over the body of Hodor. As the thunder roars outside the tower they are hiding in, Hodor becomes scared and continues to yell the one word he always repeats – “Hodor.” None of them can get him to stop, and all of a sudden, Bran wargs into Hodor’s body, subduing him and saving them from being caught.

Jojen Reed later tells Bran that shifting into an animal is rare, but not totally uncommon. But shifting into another human, that is something nobody has ever done. It is now more clear than ever that Bran has real power. Not only has he shifted into an animal and a human, but he also continues to have prophetic visions, characteristic of a Greenseer.

Bran makes the decision that it is no longer safe for his little brother, Rickon, to continue on Bran’s journey to find the 3-eyed Raven. Should anything happen to Bran, Rickon is heir to Winterfell. 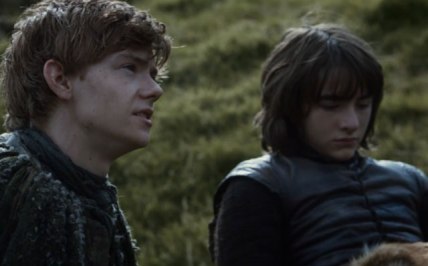 In her first true battle, Khaleesi successfully sacks the slave-city of Yunkai. Daario Naharis proposes the plan: he will enter the gates of Yunkai, slay the two guards and let enter Jorah Mormont and Greyworm. Once the three of them are inside, we see their prowess as warriors, as they slay dozens of Yunkai guards. 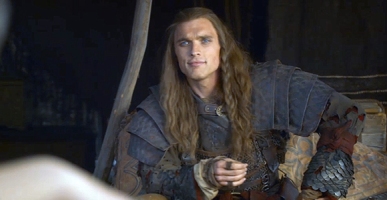 As anticipated, once blood was spilled, the rest of the slave-soldiers of Yunkai throw down their swords. Daario Naharis returns to Khaleesi with the flag of Yunkai. Despite this, it still appears that Jorah does not fully trust Daario, while Greyworm states that he does.

We continue to see an evolution of the Hound’s character, possibly emerging as more hero than villain. Though he has committed much murder, and certainly has the appearance of a gruesome villain, even as sworn protector to Joffrey, the Hound was often more heroic than not. Several times, he strategically defended Sansa from Jeoffrey. And, when Sansa was pinned down and about to be raped by a mob of peasants, it was the Hound that came to her rescue.

Now, after deserting King’s Landing, the Hound now seems to be protecting the other Stark daughter, Arya. The plan is to take her to the Twins, where her mother and brother are located for Edmure Tully’s wedding to one of the Frey daughters. As the Hound comments on Arya’s fear growing the closer she gets, Arya boldly responds that she knows of his fear of fire. She speaks of Hound’s older brother, the Mountain, who pressed Hound’s face to the fire when they were just boys. She also promises that she will put a sword through his eye and kill him one day. 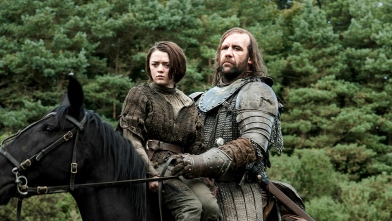 Arya and the Hound

Similar to the execution of Ned Stark in the finale of season 1, George R.R. Martin has once again rocked our world and reminded us that nothing in this world can be taken for granted. Anything can happen.

As King Robb arrives at The Twins to present his uncle, Edmure Tulley for marriage to one of the Frey daughters, we are introduced to Walder Frey – a bitter old man to say the least. Robbs apologizes to Lord Frey, and all of his daughters and granddaughters, for breaking his vow to marry one of them. After Lord Frey profusely insults the King and his wife, he calls for the wedding.

While Robb’s bannermen and soldiers are outside the walls, getting drunk on ale and celebrating a break from the warpath, King Robb is left vulnerable with no protection inside the hall. After Catelyn’s uncle, Blackfish, exits the hall to find “a tree to piss on”, her brother, Edmure, is taken from the hall to consummate the marriage with the bedding ceremony.

As Walder Frey calls forth Robb, Catelyn realizes that something is not right. She then notices that Roose Bolton is wearing armor under his clothes, at which point she screams out to warn Robb. But it is too late – the massacre begins. Robbs wife, Lady Talisa, is stabbed in her abdomen several times as she and her baby are murdered. Archers rain arrows down on Robb and Catelyn and they are both wounded. As Robb approaches his dying wife, Walder calls for his men to ceasefire and it appears he is decent enough to allow for a peaceful death and final moment between lovers. But, he merely calls for quiet so he can continue to insult and mock, even as she is dying in his arms.

Taking protection under a table, Catelyn grabs a knife from the floor and holds hostage Lord Frey’s wife. She begs for the release of her son and swears to forgive and forget all that Lord Frey has been done if he lets Robb exit. Cruel and bitter, Lord Frey responds that he can find another wife, at which point, Lord Roose Bolton sticks his dagger into Robb and tells him “The Lannisters send their regards.” It is interesting to note that throughout the history of the North over the last 1,000 years, House Bolton rose up against House Stark several times for control of the North, though the Starks put down each uprising.

The biggest act of deceit and betrayal we have seen yet. Roose Bolton was a Northerner and sworn bannerman to the Starks of Winterfell. But, after Ned’s death, we slowly saw Lord Bolton begin to shift his allegiances. After Vargo Hoat cut off the hand of Jaimie Lannister, Lord Bolton decided to send Jaimie back to his father, Lord Tywin, if Jaimie agreed to tell his father that Lord Bolton had nothing to do with maiming. It was at this point that he made the clear decision to save himself and join the Lannister cause, rather than maintain allegiance to Robb and the North. 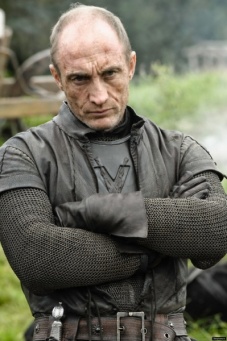 It is also interesting to note, that when Theon sacked Winterfell, it was Lord Bolton who told Robb he would send his son back to Winterfell with reinforcements to retake the castle. This entire season, it is unclear where Theon is being held and who are his captors. But, perhaps Lord Bolton may have something to do with this and is holding him captive somewhere, rather than having brought him back to King Robb.

After Robb is killed by Lord Bolton, Catelyn cuts the throat of Walder’s wife, and appears to be frozen with shock for a few seconds, almost like a statue, before her own throat is cut. All while this is happening, Arya is just outside the castle walls and she witnesses the Freys murder Grey Wind, Robb’s direwolf. The Hound, once again protecting her, tells her that it is too late, and knocks her unconscious to get her out safely.

To say the least, the Red Wedding was difficult to watch and very disturbing. It was violent and graphic and we saw “the good guys” once again murdered. It is not something we are used to seeing in most stories, and 9 times out of 10, the protagonists come out victorious in the end. George R.R. Martin has made it clear thatno assumption is safe  and anybody in this world is expendable. The brilliance is that Martin never wastes a life unnecessarily – there is a message to be found  with each death. In this instance, the message was that love will not always prevail and that choosing love over logic can, and often will, get you killed. 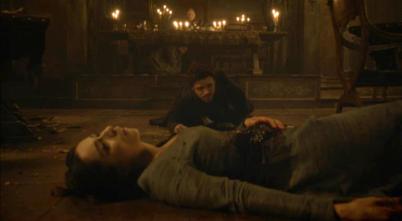 Robb and his wife Lady Talisa, both dying at the Red Wedding

Though a good man, and one of principle, Robb was not a wise king. He often made the ethical decision rather than the prudent one. For example, after the Lannister messenger arrived at his camp with message from King’s Landing, Robb chose to put him in the same holding cell as Jaimie, against the advice of his own council. The result – Jaimie was able to murder his Lannister cousin, murder the Karstark guard and eventually escape. Not only did Robb’s decision lead to two deaths and the escape of Jaimie, but because the Northern guard who Jaimie murdered was a Karstark, Lord Rickon Karstark, his father, demanded for Jaimie’s head as revenge. When Robb refused, major discord arose within his camp, and many started to doubt Robb as king. A few episodes ago, Lord Karstark murdered the 2 Lannisters boys in place of the revenge he never got on Jaimie, at which point, Robb was faced with another difficult decision. Robb decided to behead Lord Karstark, a man that had fought with his father for so many years, and was Lord to one of the most loyal and important houses in the North. Robb was counseled and knew that this beheading would mean the loss of the Karstark bannermen, nearly one-third of his army. Yet, he still decided to sacrifice these soldiers in the name of justice. And it doesn’t stop there. Because his actions lost him all the Karstark bannermen, he had to crawl back to the Freys, in order to gain their bannermen as part of his army. And of course, we all know what happened when he went back to Lord Walder Frey. And why? Because of another one of his unwise choices – his decision to choose love and marry Lady Talisa, even at the price of the consequences that would come along with him breaking his vows to House Frey.

In the end, love does not always prevail. The good guy does not always win. And in this world, there is generally a consequence, good or bad, for every action committed.