Occurring approximately 300 years ago, Aegon’s Conquest refers to the two year period during which Aegon Targaryen conquered, and more importantly, united the Seven Kingdoms. In the place of seven independent kingdoms, there were now nine regions of Westeros united as one realm under the first king of Westeros, Aegon Targaryen. Aegon wisely appointed one overlord house to oversee each region, so long as they pledged their fealty to him.

1. Aegon and his two sisters were the last living Targaryens after the Doom of Valyria. The success or failure of his conquest would determine whether or not the once all-powerful Targaryen bloodline would continue on or go extinct forever.

2. The conquest ended the way of life as Westeros had known it for thousands of years — seven independent kingdoms, each with its own king who maintained a bloodline that traced back to ancient times.  Not only were the Seven Kingdoms dismantled, but several of these kings and their ancient bloodlines were completely wiped out during the Conquest, making way for new families to emerge powerful, such as House Tully, Greyjoy and Tyrell.

3. A new system of governance was put into place by Aegon. Rather than seven kings, there would only be one king, Aegon Targaryen, who would rule from the Iron Throne. The Seven Kingdoms became the nine major regions of Westeros, and each region would have an overlord house, appointed by Aegon. In exchange for pledging allegiance to Aegon, each overlord house was granted authority over its land and the smaller houses of the region.

The map below shows the original Seven Kingdoms and their kingship houses as they existed for thousands of years prior to Aegon’s Conquest.

Aegon’s Conquest was a result of the the Doom of Valyria, a cataclysmic event that destroyed Old Valyria 100 years prior to the Conquest. Following The Doom, the only remaining Targaryens had been living at Dragonstone, the westernmost outpost of the Valyrian Freehold. Leading up to his Conquest, Aegon and his two sisters, Rhaenys and Visenya had the strength of less than 2,000 men and three dragons — all that was left of the once great Valyrian civilization. Aegon rode Balerion, Rhaenys rode Meraxes and Visenya rode Vhagar. Prior to his invasion, Aegon sent ravens  to each of the Seven Kingdoms and informed them of his intent to unite Westeros. Those who bent the knee would maintain their land and titles, while those who resisted would be conquered. Below is the history of Aegon’s Conquest and what happened when he arrived at each kingdom.

CONQUEST OF KINGDOM OF THE IRON ISLANDS

Nearly 300 years ago, Aegon landed on Westeros, the location that would go on to be known as King’s Landing. The first kingdom he approached was the Kingdom of the Iron Islands, which was ruled at the time by King Harren Hoare, otherwise know as Harren the Black.  House Hoare had ruled as kings of the Iron Islands for hundreds of years, and had invaded and conquered much of the western coast of Westeros, including the Riverlands. An oppressive leader, King Harren ruled from his newly built castle, Harrenhal, the strongest castle that Westeros had ever seen. When King Harren refused to bend the knee, Aegon and his sisters flew their dragons right over the walls of Harrenhal and destroyed it with fire. Not only did they burn Harrenhal, but they incinerated King Harren Hoare and the entire Hoare bloodline. To this day, Harrenhal appears burnt and black from Aegon’s dragons.

Aegon and his dragon, burning down Harrenhal and eradicating the ancient Hoare bloodline

After the defeat of King Harren, who had previously ruled not only the Iron Islands, but also the Riverlands which he had sacked, these two now kingless kingdoms each elected a house to lead them. The Iron Islands elected House Greyjoy while the Riverlands elected House Tully. Wisely, the leaders of each house bent the knee to Aegon and pledged their fealty. In return, Aegon made House Tully overlords of the Riverlands and House Greyjoy overlords of the Iron Islands. Aegon had defeated the first of the Seven Kingdoms and attained the fealty of their newly appointed overlord houses.

CONQUEST OF KINGDOM OF THE STORMLANDS

After taking the Iron Islands, Aegon moved onto the Kingdom of the Stormlands, ruled by King Argilac the Arrogant of House Durrendon from the castle of Storm’s End. Earning himself his nickname, King Argilac refused to bend the knee to Aegon and foolishly challenged Aegon to battle in the open field. Aegon decided to send his bastard brother, Orys Baratheon, who slayed King Argilac the Arrogant in battle. For his victory, Aegon awarded his bastard brother by declaring House Baratheon a great house. Orys Baratheon was also given the castle he had won in battle, Storm’s End, which would henceforth be known as the seat of House Baratheon.

CONQUEST OF KINGDOMS OF THE ROCK & THE REACH

After hearing of Aegon’s success in conquering the first two kingdoms, the Kings of the Rock and the Reach formed an alliance to join their armies against Aegon’s invasion. King Loren Lannister joined his Kingdom of the Rock with King Mern Gardener’s Kingdom of the Reach and together they raised over 50,000 bannermen. Aegon’s army numbered less than 10,000 and they were losing the battle, until Aegon and his sisters unleashed all three of their dragons at once. It is said that this is the only time during Aegon’s Conquest that all three dragons were ever unleashed together. Aegon and his dragons scorched the entire battlefield and this battle would henceforth be known as the Field of Fire. The dragons burned to death thousands of opposing soldiers, including King Gardener of the Reach and all his heirs.

After the battle, King Loren Lannister bent the knee and conceded his Kingdom of the Rock to Aegon. As such, Aegon appointed House Lannister overlords of Casterly Rock and made them the first warden of the West. With King Mern and his heirs dead, Harlen Tyrell, Mern’s steward, surrendered to Aegon. As reward, House Tyrell would gain much power as they were made overlords of the Reach and wardens of the South. Aegon dismantles two more kingdoms while acquiring their allegiance under his new realm.

CONQUEST OF KINGDOM IN THE NORTH

Having now conquered four kingdoms, Aegon proceeded to the North, where he met King Torrhen Stark, who planned to engage Aegon in battle.  The Starks had been Kings in the North for thousands of years and had fought off countless invaders throughout their history, most notably during the Andal Invasion. However, after seeing Aegon’s dragons, Torrhen wisely bent the knee and pledged the fealty of the North to King Aegon. In return, Aegon declared House Stark overlords of Winterfell and made them Wardens of the North. 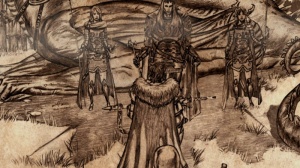 Torrhen Stark, the last King in the North, bends the knee to Aegon

CONQUEST OF KINGDOM OF THE MOUNTAIN & VALE

King Ronnel Arryn, though just a young boy, was King of the Mountain & Vale when Aegon arrived to Westeros. His mother ruled as queen regent and when Aegon’s dragons arrived the Eyrie, she insisted that her son pledge fealty to Aegon without battle. He obliged, and in exchange, House Arryn were appointed overlords of the Vale and wardens of the East.

CONQUEST OF KINGDOM OF DORNE

The Kingdom of Dorne was ruled by House Martell of Sunspear. Interesting to note, unlike all other kingdoms, Dornish law states that the eldest child, regardless of sex, shall be heir to the kingdom. As such, Dorne was ruled by Princes and Princesses, rather than by Kings.
Located in the deep south of Westeros, Dorne proved to be a difficult kingdom for Aegon to conquer. After their refusal to bend the knee, Aegon’s sister, Rhaenys, flew a dragon to Dorne but was unsuccessful due to the difficult terrain of the Dornish desert. Aegon had to abandon his conquest of Dorne and had sucessuly united six of the Seven Kingdoms of Westeros.  It was not until 150 years later that Dorne was consolidated as the seventh kingdom, when Baelor the Blessed organized the marriage of his Targaryen cousin to a Martell Princess of Dorne.

After uniting six of the Seven Kingdoms, Aegon returned to King’s Landing, where he built his castle, the Red Keep. Aegon and his Targaryen sisters continued to build up the city of King’s Landing to declare it the capitol of Westeros. Finally, he melted down all the swords of his defeated opponents and forged them into the Iron Throne, the seat from which the Targaryen Dynasty would rule for the next 300 years, until Robert’s Rebellion.

Upon completion of his conquest, the Seven Kingdoms would now be turned into nine distinct regions, each with an overlord house that oversaw the region in exchange for their fealty to the first King of Westeros, Aegon Targaryen. The map below shows their transformation from the original Seven Kingdoms that existed before Aegon’s Conquest, into the nine regions of Westeros. 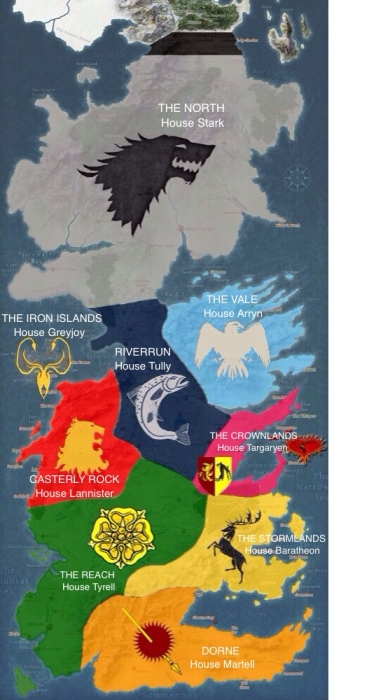 After Aegon’s Conquest: The Seven Kingdoms become nine regions, each with an overlord house