R’hllor is a prominent god on the continent of Easteros, though he has few followers on the continent of Westeros. R’hllor is more commonly referred to as the Lord of Light or the Red God. The religion of the Lord of Light is based on a dualistic view of the world  in which two opposing gods are locked in a eternal struggle that will likely decide the fate of the world. The Lord of Light represents life, light and fire. Opposed to the Lord of Light is the god whose name must not be spoken who is also referred to as the Great Other. The Great Other represents death, darkness and ice. These two gods have been at battle since the beginning of time; life vs death, light vs darkness and fire vs ice. This is very significant when you stop and think that the title of George R.R. Martin’s entire series is A Song of Ice and Fire.

Followers of the Lord of Light are referred to as Red Priests, who pray at Red Temples, which are common all across Easteros. According to the books of their religion, 8,000 years ago, a great hero named Azor Ahai brought an end to the Long Night and fought back the White Walkers with a great sword of fire called Lightbringer. Followers of the Lord of Light believe that the eternal struggle against the god of darkness will come to an end when Azor Ahai is reincarnated to fight back the darkness once again. It is said that if he fails, the world will cease to exist. Over the course of history, many have claimed to be the reincarnate of Azor Ahai, including Rhaegar Targayen, though none actually were. Today, the Red Priestess, Melisandre, appears to believe that Stannis Baratheon is the reincarnate of Azor Ahai who is destined to once again lead the fight against the darkness that approaches.

Like many other types of magic, the magic of the Lord of Light was weakened and mostly disappeared after the death of the last dragons, approximately 150 years ago. But, with the rebirth of dragons on Easteros, the power of R’hllor’s magic appears to have been strengthened. For instance, we witnessed Thoros of Myr, a Red Priest, bring Beric Dondarrion back to life after he was killed by the Hound in a trial by combat. (See video below).

Dragons, fire and light appear to be the tools of R’hllor; White Walkers, ice and darkness appear to be those of the Great Other. “The night is dark and full of terrors” are the common words of those who follow the Lord of Light. These words refer to the darkness that is brought about by the Great Other. It is common for Red Priests to make sacrifices to the Lord of Light, which leads many non-followers to believe that this religion is one of dark and evil magic. Unlike the followers of most other religions, those who follow the Lord of Light seem to realize there is a great darkness coming and a great war that will ensue — one much more significant than that for the Iron Throne.

SIGNIFICANT CHARACTERS OF THE LORD OF LIGHT

Azor Ahai lived 8,000 years ago, which was likely before the Lord of Light was recognized as a religion. As such, he himself probably did not practice this religion. However, he is a major figure of this religion and viewed as a messiah. During the Long Night, it was Azor Ahai, otherwise known as the Prince who was Promised, who saved the world from the White Walkers and pushed back the darkness. He forged a mighty sword made of fire by sacrificing the woman he loved and putting the sword through her heart. It was with this sword, Lightbringer, that he fought back the darkness. After his death, it was prophecized in this religion that at some point, he would be reincarnated to once again lead the fight against the White Walkers and the darkness they bring. If he is to fail, humanity will cease to exist. 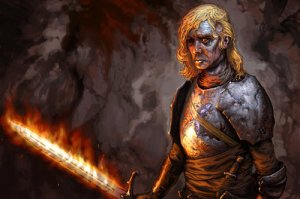 Azor Ahai, the Prince who was Promised

Melisandre is follower of R’hllor and otherwise known as the Red Priestess. Melisandre is from Asshai, which is part of the Shadow Lands, a mysterious mountainous region of Easteros where very old magic is practiced. (It is from the Shadow Lands that Daenarys’ three dragon eggs came.) At a young age, Melisandre was sold into slavery, where she developed her faith for the Lord of Light.

Melisandre has dedicated her life to service of R’hllor and displays a total faith. Several times, Melisandre has demonstrated her power of magic, generally guided by the Lord of Light. She possesses the ability to look into the Lord of Light’s fire and interpret visions of the future. She is also a shadowbinder, one who can control shadows to do her work. She gave birth to a shadow and used this shadow to murder Renly Baratheon. Today, she has joined Stannis Baratheon and is his closest advisor. She appears to believe he is the reincarnate of Azor Ahai, who is destined to once again lead the fight against the darkness of the Great Other. 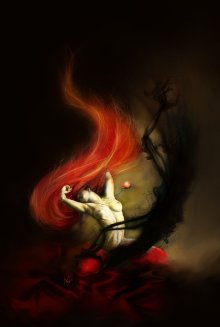 Thoros of Myr is a Red Priest from the city of Myr, located on Easteros. Like Melisandre, Thoros was given to the Red Priests at a young age and studied to become a Red Priest himself. In an attempt to spread the religion and make others aware of the threat presented by the Great Other, Thoros was sent to King’s Landing to try an convert the Mad King Aerys, but to no avail. He ended up becoming companions with Robert Baratheon, and a member of his court after Robert took the Iron Throne. After meeting Beric Dondarrion, Thoros and Beric formed the Brotherhood without Banners, an outlaw group that swore fealty to no king or lord and fought for justice in the name of the Lord of Light. Thoros began to develop powers that he never before had. In addition to being able to see visions in the flames, he resurrected Beric Dondarrion back to life several times. 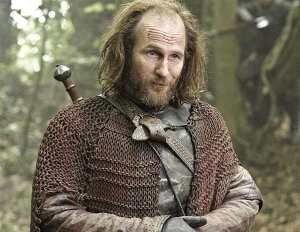 Beric Dondarrion, also known as the Lightning Lord, arrives at King’s Landing when Ned Stark is appointed as Hand of the King. After the capture of Tyrion Lannister, Gregor Clegane raids the Riverlands looking for Tyrion. Ned Stark appoints Beric as captain of a small party set out to arrest the Mountain. In battle, Beric is killed by the Mountain, though Thoros of Myr is able to bring him back to life. Beric and Thoros form the Brotherhood without Banners and fight for the justice, namely against the Lannisters. They raid many Lannister camps, though all the while, Beric is thought to be dead. During their battles, Beric is killed several more times, but each time resurrected by Thoros. Though, each time resurrected, Beric loses more of his memory and comes back a weaker man. The Brotherhood without Banners later encounter Arya Stark, who witnesses Beric’s death at the hands of the Hound, during trial by combat. But, once again, Thoros prays to the Lord of Light and resurrects the Lightning Lord. 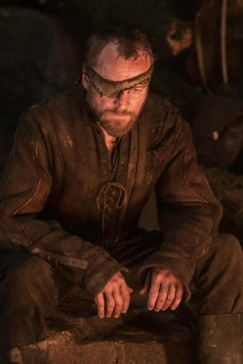