6,000 years ago, after the Children of the Forest and the First Men had been living in peace together for thousands of years, the Andals arrived at Westeros. The Andals come from the Hills of Andalos, located on the continent of Easteros. The Andals are extremely significant because they waged war against the First Men who had now been living on Westeros for 6,000 years. The Andals far outnumbered the First Men and  overtook most of the kingdoms of the First Men. With them, they brought the culture that we now see today in the show. They brought a new language, a new way of life, and most importantly, a new religion. The religion they brought was the Faith of the Seven. This is the religion that is practiced almost everywhere in Westeros today, except for in the North. 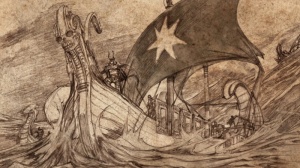 The Andals cross the Narrow Sea and arrive at Westeros

This is because the Andals conquered the six southern kingdoms of Westeros, but were never able to conquer the North. The First Men, among them House Stark, protected the North from the Andals and never adapted their culture. This explains why the Northerners we see today are descendants of the First Men, while most everybody else born in Westeros are descendants of the Andals. This is extremely significant in understanding the fundamental differences between the Starks of the North and the rest of Westeros today.

We don’t just love the Starks because they are the protagonists of the show. The Starks and Northerners still carry the spirit and blood of the First Men. They pray to the Old Gods, they still honor the forests and they live like the First Men did – Kings in the North. The overwhelming majority of people seen in the show in Westeros have descended from the Andals and they have a totally different bloodline and culture. Almost everybody else now prays to the Faith of the Seven which was brought over by the Andals. When the Andals came, they brought a new language and writing system, which supplanted that of the First Men. Almost all of Westeros’ history was written after the Andal invasion, and because of this, it is written and told from the Andal perspective. If history were told from the perspective of the First Men or Children of the Forest, it would probably be totally different.