House Clegane is not a major house of Westeros, but is the house of brothers Gregor and Sandor Clegane, important characters in the GoT series. House Clegane served for hundreds of years as kennel-masters to House Lannister at Casterly Rock. About 100 years ago, Tytos Lannister, father of Tywin Lannister, was attacked by a lion, but was saved by a Clegane whose name is unknown. In saving Lord Tytos, the Clegane lost a leg and three of his dogs. As reward, Tytos gave House Clegane lands and titles; their sigil would become three dogs on a yellow field, representing the three dogs lost to save Lord Tytos. 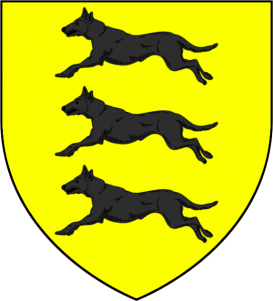 Gregor Clegane is son of unknown Clegane #2 and older brother to Sandor Clegane. Gregor is freakishly large, over 8-feet tall, with arms as large as tree trunks. Due to his immense size and strength, he is nicknamed the Mountain. He wields a 6-foot sword and wears armor that no other man would be able to move in, much less fight. Gregor is a knight in service of House Lannister and is known for his savage cruelty. He has committed countless acts of murder and rape. As a youngster, he scarred the face of Sandor, his younger brother, by holding it against a fire — punishment for Sandor playing with one of his toys. More recently, during Robert’s Rebellion, the Mountain killed baby Prince Aegon, son of Elia Martell and Rhaegar Targaryen, before raping and murdering Elia herself. As result, House Martell has sought revenge against the Mountain ever since.

Gregor Clegane, aka the Mountain

Sandor Clegane is the younger brother of the Mountain. Though not as large as his older brother, Sandor is also a very large and strong man; he is considered one of the most dangerous fighters in Westeros. His nickname is the Hound, due to his loyalty to his masters and the dogs of House Clegane’s sigil. At a very young age, his face was badly burned by his older brother, creating a terror of fire ever since. Though Sandor is also thought to be a cruel man, he has also showed acts of kindness and of heroism, such as protecting Ser Loras Tyrell from his brother, the Mountain, during the Tourney of the Hand (see video below).

He also protected Sansa from the cruel torture of King Joffrey. After the Battle of Blackwater Bay, the Hound leaves King’s Landing, presumably sick of serving the cruel King Joffrey. He is later arrested by the brotherhood without banners and accused of killing Elia and her children, though it was actually his brother that was guilty of this crime. None the less, he is sentenced to trial by combat and defeats Beric Dondarrion, despite Beric fighting with a sword of fire. He later kidnaps Arya and intends to bring her to the Twins to receive ransom from Robb Stark; instead, he arrives with Arya at the Twins right after the Red Wedding. 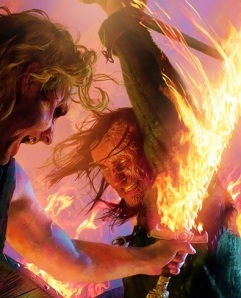 The Hound fights Beric Dondarrion during trial by combat