Braavos is located on the continent of Easteros and is thought to be the most powerful and prosperous of the Free Cities of Easteros. Not just one landmass, Braavos is composed of hundreds of islands that connect with each other by stone bridges. The islands of Braavos sit within a lagoon and there are hundreds of canals that run throughout the city. Braavos derives the majority of its power and influence from the sea and is ruled independently by a Sealord — a position that is chosen, unlike the more common hereditary rulers of Westeros. 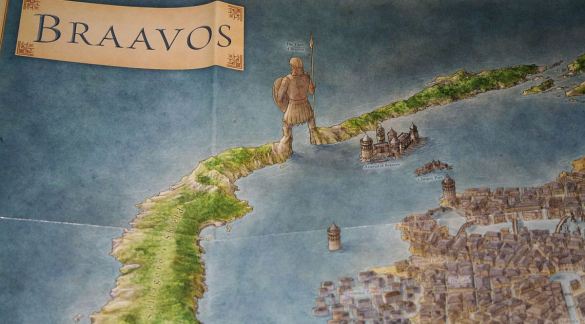 Braavos, located within a lagoon which is protected by the Titan of Braavos

Braavos was founded 500 years prior to Aegon’s Landing, making it approximately 800 years old. However, Braavos did not reveal itself to the rest of the world until approximately 400 years ago. Prior to this, Braavos existed as a secret city that few outside of it knew existed. Because of its secrecy, Braavos was never taken as a part of the Valyrian Freehold and has been a free city since its founding. Braavos was founded by Valyrian refugees that had fled their homes to escape the expansion of the Valyrian Freehold. After discovering and founding the land of Braavos, it was successfully concealed from the outside world for approximately 400 years, until the Doom of Valyria, at which point Braavos revealed itself to the rest of the world.

Because it remained secret for so many years, Braavos was isolated from all outside influences and developed a very unique identity. The culture of Braavos is one that is wrapped in much mysticism and magic. All gods are accepted on Braavos and there are many different cultural groups, such as the Faceless Men, a Braavosi league of assassins that pray to the Many-Faced God. Jaqen H’ghar, a Faceless Man, is an example of a mystical character who comes from Braavos. The House of Black and White is the temple of the Many-Faced God and the home to the Faceless Men. Syrio Forel is another man who comes from Braavos; he teaches Arya the Braavosi practice of Water Dance — a uniquely Braavosi style of sword-fighting. The words Valar Morghulis are commonly spoken in Braavos, meaning “all men must die.”

The House of Black and White, temple to the Many-Faced God