Bronn Stokeworth is a low-born sell-sword, somebody who offers their sword of protection to anybody willing to pay for it, rather than fighting for a specific house. In an interesting chain of events, Bronn comes into the service of Tyrion Lannister and the two develop a close bond. Suspicious that Tyrion was responsible for the attempted murder of her son, Catelyn Stark went into the nearest inn and asked the men to help her arrest Tyrion, after she intercepted him on her way back to Winterfell. Bronn assists in arresting Tyrion and they bring him to the Eyrie for holding. After Tyrion chooses trial by combat, Bronn offers to champion Tyrion in battle and defeats the man he fights, saving Tyrion’s life and earning him his freedom. From that day forth, Bronn came into service of Tyrion. 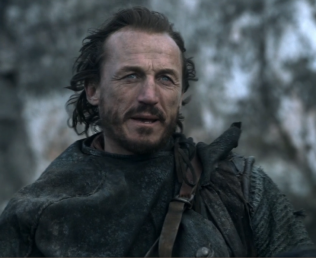