Season 4 is just around the corner and not all of us have the time to rewatch episodes from season 3. So, here is an overview of where season 3 left off to get you ready for the new season.

Theon Greyjoy has burnt down Winterfell in an attempt to prove to his father that he is still an ironborn. Bran and Rickon Stark escape Winterfell, and Theon burns the bodies of two other boys to cover up their escape and make it look like he killed them. As such, most people believe Bran and Rickon are dead. Theon is later captured by Ramsay Snow, bastard son of Roose Bolton and is tortured for a long period of time. After the Red Wedding, House Bolton are now in control of the North and their capture of Theon is an attempt to rid the North of the ironborn invaders that are still there. Ramsay cuts off the cock of Theon and sends it to his father, Balon, who refuses to retreat his men in the North and would rather let Theon die. Theon’s sister, Yara, refuses to let her little brother die and rounds up 50 of her best warriors in an attempt to free Theon. 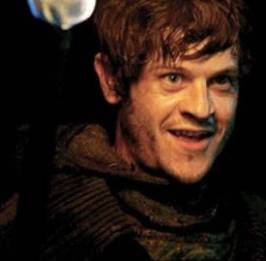 Bran and Rickon escape Winterfell, along with their direwolves, as well as Asha and Hodor. They soon encounter Jojen and Meera Reed who have traveled a far way to find Bran. Jojen aims to guide Bran and help him with the visions he has been having. Jojen tells Bran that Bran is a greenseer, one who has prophetic visions in his dreams. Along the way, we also learn that Bran is a skinchanger, or a warg, one who can posess the minds of animals and control their actions. However, Bran showed his unique power when he not only posessed the mind of his direwolf, but also of Hodor, another human. Jojen tells Bran that no person has ever done this before. Though becoming increasingly dangerous, Bran is steadfast in continuing his journey north of the wall to find the three-eyed raven he has been seeing in his dreams. He decides it is no longer safe for his younger brother Rickon, who would become heir to Winterfell if anything happened to Bran. Rickon and Asha split from the rest and head for Castle Black to meet Jon Snow. 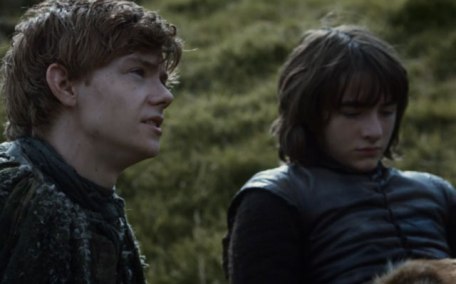 JON SNOW SPLITS WITH THE WILDLINGS

Jon Snow has infiltrated the Wildlings and has claimed to no longer be a crow, or a brother of the Night’s Watch. He has fallen in love with Ygritte. Though, it was unclear for some time where his loyalties actually lay. After the Wildlings successfully climb over the Wall, they encounter an innocent man who breeds horses for the Night’s Watch. The wildlings tell Jon Snow to kill him as a test. When Jon Snow refuses, they realize he was a crow all along and draw their swords. Ygritte stands by Jon Snow and is willing to fight for love, rather than her own people. Sadly, Jon Snow turns his back on Ygritte and rides off after a fight with the Wildlings. Ygritte catches up to him down the road and he tells her that he loves her, but he must return home to warn everybody of the imminent danger presented by the Wildlings and the White Walkers. As he rides off, Ygritte shoots him with several arrows, though he escapes and makes it back to Castle Black.

Samwell Tarly is at Castle Black when Jon Snow arrives. However, before arriving at Castle Black, Samwell had a journey of his own. After Lord Commander Mormont was murdered by one of the Night’s Watch brothers, Samwell fled with Gilly and her baby. While wandering north of the wall, a White Walker came after Gilly’s baby and Sam killed the White Walker with a dragonglass dagger (see video below). When they make it back to Castle Black, Sam tells Master Aemon of his journey and Master Aemon sends all the ravens they have to every corner of Westeros to warn them of the imminent danger of White Walkers.

Stannis Baratheon receives the raven’s message and Melisandre’s visions prove true. Darkness is coming. She notes that death is upon the wall and that the war for the Iron Throne is insignificant compared to the impending war that is coming from beyond the Wall. As she has been saying, Stannis is the one true king who must fight back the darkness to save the world.

ARYA, THE HOUND & THE RED WEDDING

After parting ways with Jaqen H’ghar at Harrenhal, Arya joins up with the Brotherhood without Banners. Along the way, the Brotherhood captures the Hound, who desserted King’s Landing after the Battle of Blackwater Bay. He was sick of fighting for other men and serving King Joffrey.  The Brotherhood sentence the Hound to trial by combat for crimes that he did not actually commit. In combat, the Hound kills Beric Dondarrion, though Thoros of Myr ressurects him back to life (see video below).

Later, Arya splits with the Brotherhood and she is captured by the Hound, though he means her well. He plans to bring her to the Twins, where her brother and mother will be for the wedding that is to take place. The Hound and Arya arrive just after the Red Wedding and Arya witnesses her dead brother, Robb. After leaving the Twins, Arya and the Hound encounter several Frey bannerman bragging about the death of her brother, one of which claimed to tie the head of Robb’s direwolf onto the corpse of Robb. Arya stabbed the man several times and killed him, before the Hound protects her and kills the other bannerman. This is Arya’s first kill.

In the aftermath of the Red Wedding, Robb and Catelyn Stark are both murdered, along with Robb’s wife and their unborn child. Catelyn’s brother, Edmure, who just married a Frey girl, is now a prisoner of House Frey. Catelyn’s uncle, Blackfish, escapes the Red Wedding. Roose Bolton who had conspired with Walder Frey and Tywin Lannister is now warden of the North. Walder Frey is Lord of Riverrun.

JAIME AND BRIENNE OF TARTH

Jaime Lannister has been on a journey with Brienne of Tarth, who was charged by Catelyn Tully, with the duty of returning Jaime back to King’s Landing in exchange for the release of her daughters. However, Jaime and Brienne are captured by men of Roose Bolton and taken back to Harrenhal. Roose Bolton allows Jaime to return to King’s Landing under the condition that Jaime tells Lord Tywin that Roose had nothing to do with Jaime’s hand being cut off. However, Roose does not allow Brienne to journey with him and she is left at Harrenhal to be raped and murdered. However, after leaving Harrenhal, Jaime has a change of heart and returns back to save Brienne, who is trapped in a bear pit to battle a bear. Jaime jumps in and eventually saves her (see video below). Together, they arrive at King’s Landing, where Jaime sees his sister, Cercei, for the first time in a long time.

BACK IN KING’S LANDING

Tyrion has been forced by Lord Tywin to marry Sansa. With Robb dead and Bran and Rickon thought to be dead, a baby between Tyrion and Sansa would become heir to Winterfell and give House Lannister control over the North. Lord Tywin also insists that Cercei marry Ser Loras Tyrell, to strengthen the ties between House Lannister and Tyrell.

Varys offers Shae, the true love of Tyrion, diamonds to leave King’s Landing. He claims that Tyrion is one of the few man of Westeros that can actually do good for the world. Shae refuses his diamonds and refuses to leave. It is unclear whether or not Varys meant his words, or if he had other motives for wanting Shae to leave.

King Joffrey continues his madness and grows madder by the day. He is set to marry Margaery Tyrell.

KHALEESI IN THE EAST

On the continent of Easteros, Khaleesi achieves won victory after the next. First she sacks the city of Astapor and acquired their army of the Unsullied. Now with a large army and dragons at her side, she conquers the slave city of Yunkai. After freeing their 200,00 slaves, they proclaim her Mhysa, which means mother. Khaleesi is aided by Ser Barristan Selmy, Ser Jorah Mormont, Daario Naharis, and Greyworm, the captain of the Unsullied. 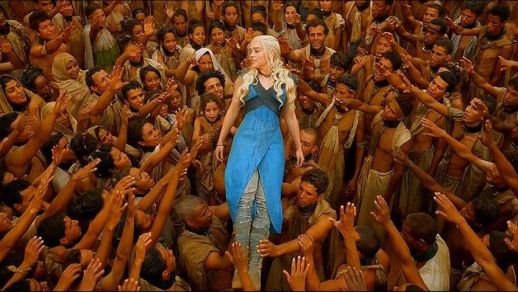 After freeing them, the Yunkish people embrace Khaleesi as Mhysa